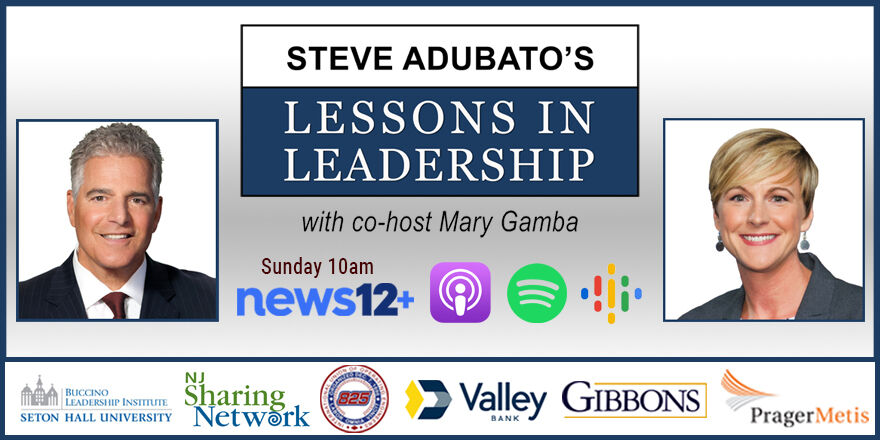 Steve Adubato, PhD, is the anchor of several programs on PBS stations WNET and NJTV and is the author of

five books including his latest, "Lessons in Leadership" and “What Were They Thinking", which

Deliver.com to watch this video podcast, or subscribe to the podcast on Google Play, Apple Podcasts or

Spotify. Steve also provides executive leadership coaching for a variety of organizations both regionally and

nationally. For more information and to find other articles Steve has written on communication and

Everyone is a Leader…And a Problem Solver
Steve Adubato, PhD
Leading seminars and coaching always teaches me something new about leadership and communication.  In a recent seminar, while discussing certain leadership frustrations many leaders have around the work of team members, a client brought up his concerns about team members sometimes bringing him problems, dumping them on his lap, and expecting him to “fix” things simply because he holds the highest position in the org chart.  Consider the following when it comes to leadership and problem solving:
--Problem solving 101.  Have you ever heard a leader say don’t bring me a problem unless you have a solution?  That is not exactly what we are talking about.  This is too simplistic, myopic and discourages team members from bringing problems to you because too often the solution isn’t so clear cut.  I have come to look at it this way.  Before you go to a leader of an organization in a knee-jerk fashion by saying, “Hey boss, we have a problem,” team members need to think, brainstorm, and consider possible options and potential solutions.  That doesn’t mean that they know exactly what to do, but they have thought about it.  They have pondered it.  They have struggled with it.
--Why doesn’t this happen more often?  I have come to the realization that many team members have what I call the “I am not the leader, you are” philosophy.  But that thinking just won’t get most teams where they need to be in a highly competitive, fast-changing, evolving environment with intense competition.  That approach won’t work on the best teams, the teams that have to be innovative, creative, entrepreneurial and ultimately successful.  In fact, what I am advocating is that ultimately, on the best teams, “everyone is a leader.”
--What is the job of the leader of the team who isn’t at the highest level on the organizational chart?  I argue that the leader should take their frustration around having a problem dumped on their lap and channel it into asking effective questions of team members and helping them to be the most effective leaders they can be.  My approach is to describe my own shortcomings as a leader and what I have learned in the process.  In this regard, I have been guilty of being a less than effective leader when having a problem dumped in my lap.  I admit it, I have a “fix it” mentality.
--A “fix it” mentality is not the best approach for a leader who wants to build the best team possible.  It creates unintended consequences.  More specifically, if a leader is the “Mr. Fix It” team members come to expect he or she will simply fix any problem, and that leader enables others not to think for themselves.  He or she lowers expectations for every team member by not challenging them to be more creative, entrepreneurial and strategic in their thinking and collaborating with others by coming up with options as to how to deal with particularly difficult situations.  In my view, it creates a “top down” culture that does not promote an entrepreneurial, innovative spirit.
--Encourage collaboration and brainstorming.  As leaders, we must help our team members be the leaders they are capable of being, even if they tell you at first that they are not leaders, but they are willing to follow direction.  That is not enough.  As leaders we must encourage collaboration, brainstorming and yes, the struggle of team members thinking through a problem and presenting possible options and solutions.  Is any of this easy?  Of course not.  But leadership, at least the kind I am describing, is not for everyone.  But for those of us who try to practice this leadership on a daily basis, in spite of the frustrations, it is extremely rewarding.